Beyond Beef has landed on Aussie supermarket shelves

Posted by Media Release Agency on 18th May 2020 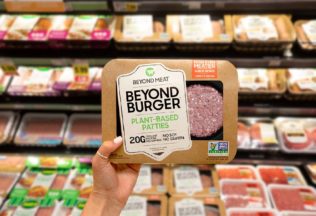 100 percent plant-based mince that looks, cooks and tastes just like beef? Enter: Beyond Beef®. The revolutionary, US-founded plant-based meat brand, Beyond Meat®, has upped their product ante with this new addition – which will tantalise taste buds and offer a versatile and healthy alternative protein choice to add to the weekly shop.

Whether you’re a vegetarian, vegan or meat-eater, the plant-based “beef” mince tastes as near as the real deal and offers consumers the freedom to transform the mince into a meaty, plant-based masterpiece – think stuffed mushrooms, bolognaise, tacos and of course, Beyond Beef® burgers (topped with all your favourite trimmings).

Each pack of Beyond Beef® contains more than four Beyond Burgers’ worth of mince and is now available to purchase exclusively at selected Coles retailers across the country.

With many Australians recognising the health benefits of a predominantly plant-based diet, the demand for meat free products with high nutritional value has soared

Leading plant-based food distributor Future Farm Co is responsible for bringing Beyond Meat® to Australian and New Zealand shores and is focussed on championing the benefits of plant-based products to the mainstream.

Future Farm Co anticipates a positive response to the launch of Beyond Beef thanks to the already huge fanbase that exists in the Australian market for Beyond Meat’s range – the new mince product is set to elevate the plant-based offering available to Aussie consumers.

According to Future Farm Co, Aussie consumers of Beyond Meat® products are typically existing meat shoppers – who are looking for veggie substitutions a few times a week – and the addition of Beyond Beef is set to amplify this trend and encourage healthier and more sustainable alternatives.

Beyond Beef® has a RRP of $18 per 500g pack. It is available in Australia exclusively at selected Coles supermarkets.