Health and consumer groups are calling for an overhaul of food packaging regulations following the release of new research carried out by Ipsos-Eureka Social Research Institute, which suggested the ‘traffic light’ labeling system would assist consumers in their decision-making process.

Traffic light labels display fat, saturated fat, sugar and sodium levels in three separate colour coded circles. Green means a food is low in the respective contents, while amber is medium and red is high. The Daily Intake Guide, which is currently used by many manufacturers, highlights the contribution of contents (including saturated fat, total fat, sugar and salt) provided per serve as a percentage of the recommended daily intake for an adult.

“Australia is gripped by a growing obesity epidemic and the government must act now to ensure shoppers can use nutrition labels on food to make healthy choices,” claimed Kathy Chapman, Nutritionist at Cancer Council. “The simple traffic light system is the way forward, and in basic terms, green means a food item is healthy and red means unhealthy. ”

“Traffic light labels are simple and easy to use,” CHOICE Food Policy Officer Clare Hughes added. “They enable busy consumers to make healthy choices while doing their shopping. Shoppers don’t have all day to stand around in supermarket aisles calculating their dietary needs.”

The findings have been questioned by the Australian Food and Grocery Council (AFGC), who believe the Daily Intake Guide provides the consumer with the highest quality information.

“The release today of survey results by vocal advocacy group CHOICE and its coalition partners showing that consumers favour traffic light food labelling over the existing Daily Intake Guide labelling system is wide of the mark,” AFGC CEO Kate Carnell said in a statement. “The fact that CHOICE’s survey results contradict a large portion of the data produced by reputable international organisations leads us to question their approach.”

“For example, independent research conducted by specialist research firm Newspoll on the Daily Intake Guide labelling found that around 66 per cent of Australians believe that the Daily Intake Guide is easy to read and understand,” Ms Carnell added. “Similarly, a study by the European Food Information Council also found that consumers had a strong understanding of the daily intake system, with 89 per cent being able to correctly interpret the labelling.” 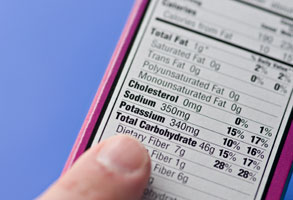 Ms Carnell insists that the traffic light system is “an over simplistic approach”, pointing to an example of a comparison between lollies and dried sultanas. “…If applied to a serving of lollies and a serving of dried sultanas traffic light would suggest to the consumer that there is no nutritional difference between these foods, even though the Daily Intake system shows that the serve of lollies contains double the amount of energy and sugar. This is not an isolated example,” she reported.

The arguments for and against traffic light labeling are many and varied, including:

Australian Food News would welcome your views on the issue. Is the ‘traffic light’ system as good as CHOICE and the Cancer Council contend? Or should the focus remain on the Daily Intake Guide?

The full study can be found at: www.cancercouncil.com.au/nutrition/foodlabellingreport.