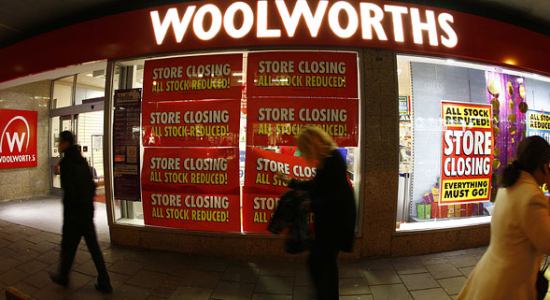 Long been a part of the retail offering in Britain where families on a budget could find everything from chocolate and toys to toiletries, socks & jocks and stationery, Woolworths in the UK has been a familiar brand for decades.

Sadly for some British consumers, from January 5th the last Woolworths door will close, putting around 27,000 staff back on the job market & leaving 807 retail premises looking for an occupant. Woolworths are yet another casualty of the world’s financial meltdown after they unsuccessfully tried to sell the business but found no suitors for their dated business model, tired & haphazard inventory & indeterminent pricing policy.Where once Woolworths represented great value, in recent times they didn’t have a clear consumer offer with any discernable benefits that would encourage modern day consumers into their stores, frequently selling outmoded merchandise that was no cheaper than their competitors.In 2001 F.W. Woolworth closed down in the US, reopening as Foot Locker Inc., but Woolworths UK  (no relation to its U.S. parent)  traded on in Britain where “big box” retail formats are less common & shoppers were comfortable with their discount variety format.Like customers of the original “five & dime” stores in the US or “nothing over 2/6d” in Australia, Woolworths in UK was a nostalgic place for baby boomers, reminiscent of their early days with modest pocket money & few places to spend it, but better merchandised retailers have stolen Woolworths niche & put the old girl into retirement.The  closing down sale, touted “Woolworths Biggest Sale Ever.” drew crowds eager to see if they could find a bargain as well as the old guard visiting for the last time.”Let’s be clear about the demise of Woolworths,” wrote Julia Finch in The Guardian last week. “It was not caused by Gordon Brown, or the credit crunch. It was caused by failing to attract enough shoppers to spend money. It was the result of being a horrible place to shop, which offered nothing that wasn’t cheaper or better elsewhere.”

Government accused of failure in TPP alternatives
The Australian Federal Government has been accused of failing to do its research into the pro’s and ...
Professors speak out about dangers in “clean labelling”
A pair of US professors in food science and nutrition have warned consumers may not realise the poss...
Microplastics harming our drinking water: Deakin research
Plastic in our waste streams is breaking down into tiny particles and causing potentially catastrop...
A new era in food delivery is emerging, Rabobank report
A new era in food delivery is rapidly emerging says a new report from Rabobank.
British government food agency launches campaign against burnt toast
Burnt toast might be doing worse things to you than ruining the taste of your breakfast says a Briti...
‘Pizza Hut shoe’ launched, includes ordering features
Watch out Domino’s, Pizza Hut is also moving into online technologies – at least in North America fo...
Australian seafood industry depends on exports, IBISWorld
New research from IBISWorld has found Australia’s fishing and seafood processing industries are beco...
Chinese demand for infant formula expected to keep growing, Mintel
Demand for infant formula in China is “poised for impressive growth” market research group, Mintel, ...