Western Australian Agriculture and Food Minister Terry Redman has predicted a bright future for the Buy West, Eat Best brand at a breakfast function to celebrate the program’s third anniversary. 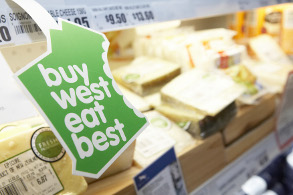 “The Buy West, Eat Best concept has been embraced by the Western Australian food industry – from small producers right through to the big supermarket chains,” Mr Redman said.

“Membership numbers have grown from just two to more than 100 in three years, and continue to climb.

“I firmly believe the program has been responsible for a clear shift in retailer support for local WA produce.”

The Buy West, Eat Best program, with its distinctive green and white logo, was first launched to industry in November 2007 and to the public in May 2008.

“Since then we’ve seen the establishment of WA’s first Buy West, Eat Best restaurant; the successful ‘Be vocal about eating local’ TV campaign; and the launch of the fantastic Buy West Eat Best cookbook,” the Minister said.

“All this has meant that in the latest research, eight out of 10 consumers recalled the Buy West, Eat Best brand.

“This is just the beginning. The Department of Agriculture and Food has started discussions with a Singapore retailer keen to introduce its customers to WA food using the Buy West, Eat Best brand.”

The program is also receiving broader recognition. Last week, it was a finalist in the Developing the Economy category in the Premier’s Awards and won the Best Communications Campaign category at the Rural Media Association awards.

“A lot of farmers in WA are struggling through one of the driest winters we’ve ever had. One of the best ways for all West Australians to show their support for our rural communities is to buy our top-quality fresh local produce,” Mr Redman said.

Can a desert nation solve the world's water shortage?
By 2025, 60 per cent of the world's landmass will experience water shortages, but can a desert natio...
Coles and Optus dial-up value with new Coles mobile prepaid plans
Coles Mobile is lowering the cost of staying connected by supercharging the amount of data offered ...
CCA announces the launch of new Coca-Cola Energy
Coca-Cola Australia today announces the launch of the first energy drink, Coca-Cola Energy. The ...
The Freeze-Dried brand used by top chefs that every home cook needs in their pantry
New Zealand’s leading freeze-dried company, Fresh As, has launched in Australia and aims to revolut...
Food and Beverage Awards 2017 winners
The 2017 Food and Beverage Award winners have been announced with meat producer Harvey Beef taking h...
Australia’s top 5 wasted food ingredients
Australian food rescue charity, OzHarvest, has revealed Australia’s most wasted ingredients in an ef...
Online takeaway deliveries have advantage over supermarkets
Despite a recent Roy Morgan survey report showing that supermarkets have been grabbing market-share ...
Menulog founders take on $8 billion café sector
A new online platform which allows cafes to pick and choose supplies from different food distributor...