What a Mondelez takeover of Hershey’s could have looked like

The Hershey’s Company has rejected an acquisition bid from Mondelez International, the owner of Cadbury chocolate.

The bid, rejected late last week, was for a mix of stock and cash consideration, totalling a US $107 a share of Hershey’s common stock plus other non-monetary considerations.

Hershey’s Board of Directors said they carefully evaluated the offer but unanimously decided to reject the bid.

“The Company’s Board of Directors, after receiving input from the Company’s management and its outside financial and legal advisors, carefully evaluated the indication of interest,” Hershey’s said in a statement.

“Following this review, the Board of Directors of the Company unanimously rejected the indication of interest and determined that it provided no basis for further discussion between Mondelez and the Company.”

Editorial analysis: Takeover may have boosted Mondelez’s US presence

Mondelez is the world’s second largest chocolate manufacturer, yet Cadbury has never really taken off in the US.

What a Mondelez takeover of Hershey’s would look like 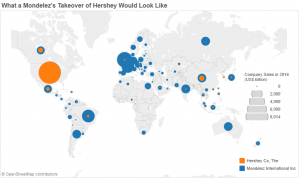 Hershey’s is currently imported into Australia by Hollier Dicksons,  which is also a distributor of numerous brands including Red Bull energy drink, Hillier’s chocolates and Go Natural snacks and bars.