How David Jones plans to expand its premium food business 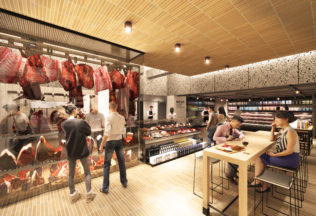 David Jones has confirmed it will be opening a series of new food halls focused on providing premium food offerings to Australians.

With the stores set to offer dine-in experiences, along with premium grocery items for sale, David Jones will commit AUD $100 million to the project over the next three years.

David Jones previously attempted to venture into premium grocery retailing, establishing the Foodchain in 2000, before closing it by 2003 after the concept failed to take off.

John Dixon, Chief Executive Officer of David Jones, however said customers today are increasingly telling David Jones that they view retail as a leisure activity and a “place to meet”.

“Strategically food is going to play a very important role in terms of how we can differentiate ourselves from other retailers, it’s also something the online pure-plays can’t do. Food and fashion will be a very strong combination for our customers in the future,” he said.

Dixon said that the David Jones Food Halls would attempt to fill the gap in premium food and grocery retailing within Australia.

“When people are focused on price they tend to cut corners and compromise on quality and we are at the entirely opposite end of that,” Dixon said.

‘‘We have looked at all the best food outlets in the world including Eataly, La Place in Holland and Marks & Spencer, and wrapped them all up in our new offerings,’’ he said.

David Jones says its new venture is not a supermarket, but rather its own unique offering which will support Australian food suppliers.

“The only time we will not do that is if the item doesn’t exist in this market or if it’s an authentic, unique product from overseas,” he said.

Longer shelf-lives for dairy products may be around the corner
Dairy producers may soon be able to improve the quality of their products, including extending produ...
Three important new reasons to love the pomegranate
POMEGRANATES are appreciated across the world, any time of year, as evidence keeps mounting about th...
Allen’s has supercharged its iconic Frogs Alive with a burst of sourness
Let your taste buds come alive! The team at the iconic lolly brand Allen’s are launching Sourz Frog...
NSW Container Deposit Scheme goes from strength-to-strength with major new milestones
Return and Earn, the NSW Container Deposit Scheme, continues to go from strength to strength achiev...
Campaign to promote veggie steaks on the barbie and better health
While most Australians will be throwing meat on the BBQ on Australia Day, new research from Mintel h...
CSIRO researchers find Australia’s ‘diet personalities’
Uncontrollable food cravings are one of the main reasons Australians fall of the diet bandwagon new ...
Dancing patrons spark $10,000 covid breach fine for Leichhardt venue
Odyssey Bar Restaurant in Leichhardt has been hit with a $10,000 fine for COVID safety breaches aft...
Coles’ ongoing growth attributed to focus on ‘Every Day value’
Managing Director, John Durkan, has attributed Coles’ ongoing sales growth to the supermarket group’...