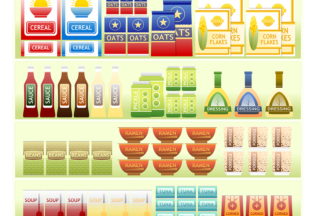 Are the tiny cracks evident in the current supermarket business model just the beginning of what will become crevasses that will swallow supermarkets, or just annoyances that can be managed?

My view is the former, although we are currently a long way from Coles and Woollies being irrelevant to our lives, and as the dominating incumbents, they do have the option of anticipating and leveraging the changes as they evolve.

The current supermarket business model was built to leverage scale. That is its strength, the ability to centralise decision making and scale those decisions back through supply chains, and out into the consumers’ pockets. Scale has been the dominating characteristic of successful businesses since Alfred Sloan turned General Motors from a failing minnow into a monolithic hierarchical organisation in the 1920’s and 30’s.

The world however has changed.

Hierarchical organisations no matter how well optimised, cannot match the agility of local competition that is more organic in nature, adaptable in close to real time, and able to take advantage of the little cracks that result from the siloed management of the legacy organisation. They are simply able to adapt quicker to the changes in the competitive context in which they operate.

We see evidence of this all around us, from the turnaround in the US military capability under General Stanley McCrystal, to the organic growth of technology companies like Amazon and Google that are organised more as networks than they are as hierarchies, to the growth of local farmers markets, and pop up stores in the increasing number of empty retail spaces in suburban malls.

The siloed, hierarchical organisations of the 20th century have seen their best and are crumbling in the face of the changes in our ability to gather, curate and share information, and then act on it to create and deliver value.

While supermarket buyers optimise their net prices with suppliers in return for mass distribution and shelf placement, local store managers are excluded from assembling a range optimised to their local buyers. By contrast, a local operator can optimise the range, but lacks the power to optimise the cost prices by virtue of their lack of scale, but that is changing slowly.

Then you have the innovations created by technology, the Amazon Go stores, exploding options to order and schedule delivery on line, the emergence of the ‘Internet of things’ and artificial intelligence,  coupled with the social movements that are increasingly seeking product provenance as a purchase discriminator.

All this indicates to me that the capital intensive, centralised  supermarket is becoming a legacy model, just as the Department store is proving to be, demonstrated by the tsunami of bankruptcies in the US, and Myer in Australia announcing even more closures recently.

The Bachelorette’s Sophie Monk is the new Slim Secrets ambassador
Australian owned and operated healthy snack foods company Slim Secrets has announced the Bachelorett...
How beer consumption is slimming but our 'guts' continue growing
A SPIRALLING decline in beer drinking is leading Australia to a 55-year low in alcohol consumption, ...
Feeding cities in the 21st century: why urban-fringe farming is vital for food resilience
WHEN you pick up supplies at your local supermarket for tonight’s dinner, the produce will likely ha...
Cadbury Twirl Caramilk to hit the shelves in January 2020 and for a limited time
Following weeks of speculation, CADBURY is indeed set to launch CADBURY CARAMILK in a TWIRL CARAMIL...
Coles Brand Roadshow is coming to Melbourne CBD
Coles, Food innovation Australia (FIAL) and the Victorian Government are running a free industry bri...
Woolworths to use new Australasian Recycling Label
Woolworths will soon start using the new Australasian Recycling Label across its entire Own Brand pr...
Retail Food Group criticises UBS reports after share plunge
Owner of Crust Pizza, Donut King and Gloria Jean’s Coffee, Retail Food Group, has experienced a sign...
Snooper raises $1 million in crowdfunding for in store data app
Snooper, a crowdsourcing platform seeking to disrupt how brands and retailers collect data, announce...