Metcash feels the effects Aldi’s expansion into SA and WA 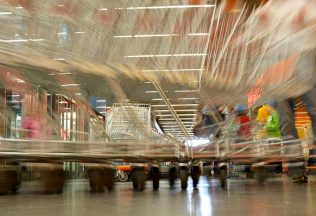 In announcing its 2018 half-year financial results, Metcash’s food pillar sales was $4.36 billion, a 1.4 per cent drop on its 2017 first half year results.

Supermarket sales fell 0.8 per cent on the prior corresponding period and supermarket wholesale sales declined 3.7 per cent.

There was a continued high level of grocery deflation (2.7 per cent) with Metcash attributing this to significant investment in price and promotion among its competitors.

Competitors expansion, particularly into South Australia and Western Australia, were also listed as a challenge.

Over the past two years, Aldi has entered SA and WA for the first time, establishing a number of new stores.

“Sales continued to improve on the Eastern seaboard, while South Australia, and Western Australia remained weaker,” Metcash reported in its financial update to the Australian Securities Exchange (ASX).

Despite the sales fall, earnings before interested and tax in Metcash’s food pillar increased by 5.8 per cent to AUD $89.4 million reflecting positive earnings from convenience.

The Metcash Group as a whole also reported group profit after tax of AUD $92.9 million, a 24 per cent increase on the group’s first half results for 2017.

Metcash further benefitted from its acquisition of Home Timber and Hardware from Woolworths with Metcash’s hardware earnings before interest and tax increasing from AUD $14.6 million to AUD $27.1 million on the corresponding period..

Metcash liquor sales increased by 5.1 per cent to AUD 41.6 billion and earnings before interested and tax for liquor increased by AUD $0.5million to AUD $27.6 million.

Metcash Group Chief Executive Officer, Ian Morrice, said the first half results were “very pleasing despite the continuation of some of the most challenging conditions in our history.”

“It was good to see earnings growth across all our pillars, as well as strong operating cashflows,” Morrice said.

“The savings achieved have been a kay factor in Supermarkets maintaining its earnings, despite the significant headwinds that include a continuing high level of deflation,” Morrice said.

The financial results were Ian Morrice’s last as CEO of Metcash. Morrice will soon be handing over his CEO role to ex-Tesco executive, Jeff Adams.