Posted by Media Release Agency on 27th May 2020 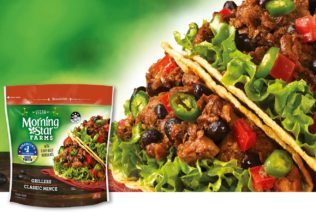 From burgers to meat-filled tacos, or even a comforting bowl of spaghetti bolognese, meat is a big part of Aussie culture with Australia home to some of the biggest meat-eaters in the world.

However new research, released today by MorningStar Farms, has found Aussies are trying to reduce their midweek meat intake by 2–3 times a week. The research revealed nearly half (49%) of the nation are considering adding more plant-based meals into their diets in the next 12 months.

Despite this intention to reduce meat intake or go plant-based, some of the barriers that are still holding Aussies back are concerns that meat-free food is tasteless (33%), a lack of confidence in cooking meat-free meals (21%) and concerns that their family / partners won’t like it (23%).

Close to half (49%) of the nation admitted they would cook meat-free meals so long as they could still enjoy their favourite dishes. When asked what meat-based dish would be the hardest to give up, the top three results from the research were spaghetti bolognese, chicken stir fry and beef burgers.

As a result of these concerns, nearly half (46%) stick to familiar recipes, with six to ten midweek meals on rotation.

For over 40 years, MorningStar Farms has been producing meat-free alternatives in the US and is now launching its delicious range in Australia, helping people break out of their midweek dinner routine.

MorningStar Farms Marketing Manager, Dan Bitti said “As Aussies spend more time at home, we found through our research, 1 in 10 people are taking this opportunity to explore different diets with over a third (38%) cooking up healthier meals.

“We want to inspire Aussies looking to eat a little healthier to un-meat their midweek. Our range of plant-based food easily swaps out the meat in popular midweek dinners to create a delicious tasting meal.”

MorningStar Farms believe in bringing the goodness of plants to everyone and is passionate about making it deliciously easy to eat plant-based. From the go-to spaghetti bolognese, tacos, burgers or even san choy bow, the frozen meat-free range easily slots into familiar, go-to recipes.

MorningStar Farms contains plant-based protein that can be cooked straight from frozen, the classic veggie mince and the veggie prime burger can be served up in minutes. MorningStar Farms veggie burgers are available in packs of 4, whilst Morningstar Farms veggie mince contains 5.2 servings per pack, perfect for those family favourite recipes. The handy resealable packaging allows you to keep any unused servings frozen until ready to use again.

Morningstar Farms is available now in Coles and independent supermarkets from RRP $7.00.