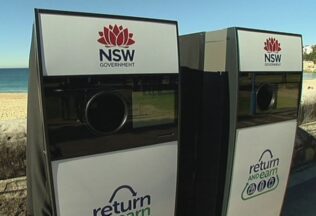 Return and Earn, the NSW Container Deposit Scheme, continues to go from strength to strength achieving a new milestone of 5 billion containers returned for recycling last month, $500 million in refunds returned to the NSW community and a staggering $18.2 million raised for charities and community groups through donations and fees from hosting return points.

The NSW scheme is a partnership between the NSW Government, scheme coordinator Exchange for Change and network operator TOMRA Cleanaway. Launched in December 2017, the NSW Government initiative has rapidly become part of everyday life in NSW with 3 out of 4 NSW adults having participated in the scheme and 88% supporting it.1

Danielle Smalley, CEO of Exchange for Change says these latest achievements reflect not just the high levels of community support for the scheme but also the strong environmental outcomes it has delivered.

“The environmental benefits are impressive with two out of three eligible containers supplied in NSW being returned through the scheme resulting in over 460,000 tonnes of waste avoiding the litter stream and landfill to be turned into a clean, valuable commodity,” she said.

“These results demonstrate that what we do as individuals is really important and can make a difference. Equally important to this success has been the contribution of the beverage industry, who fund the scheme in an inspiring example of extended-producer responsibility in action. These achievements would not have been possible without their involvement,” she added.

James Dorney, CEO of TOMRA Cleanaway which manages the network of 620+ return points across the state, says alongside the environmental benefits of reducing litter and increasing recycling, Return and Earn continues to deliver strong economic benefits.

“Not only is the scheme putting money in the pockets of the people of NSW, thousands of community groups, charities and schools are also sharing in the benefits with over $18.2 million returned via donations and fees from hosting return points,” he said.

“We’re also very proud of the fact the scheme directly employs over 700 people across the state and provides opportunities for social enterprises such as Vinnies, Hoxton Industries and Citizen Blue to also raise funds as return point operators in our customer-focused and convenient network.”

As part of scheme partners’ ongoing commitment to transparency of scheme performance, the latest key performance metrics can be viewed on the Exchange for Change homepage including the latest NSW supply and redemption volumes.

More information on Return and Earn is available at www.returnandearn.org.au.

End of supermarket power? Wesfarmers decision to spinoff Coles
Wesfarmers decision to spin-off Coles into a separate business may just signal the end of supermarke...
TV show to explore the realities of owning a franchise
A new television program airing on Channel Seven is set to expose the ups and downs of owning a fran...
Coffee more than just a drink for Swinburne Uni researchers
Researchers from Swinburne University of Technology in Melbourne have found a second-life for the va...
‘Watermelon water’ to launch in Australia
The makers of H2coco are preparing to launch a new beverage never before sold in Australia.
The chopstick resurgence
Specially crafted and sourced chopsticks are becoming a must have item for those who love food and ...
‘Exemplary’: ALDI cheered for paid leave provision for domestic violence victims
ALDI employees will have access each year to ten days of paid family and domestic violence leave as ...
International trend: food companies expanding into designer merchandise
Australians might be used to receiving toys with kid’s meals, but a new food trend is emerging out o...
Procter & Gamble unveils move into SmartLabel platform
Global FMCG giant Procter & Gamble Company (P&G) has announced that more than 3,500 of its consumer ...