Sushi now the catch of the day at lunchtime 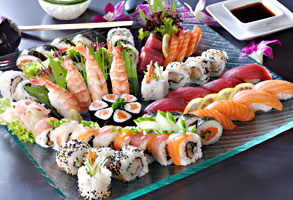 New research released by Seafish, the authority on seafood in the UK, has revealed that sushi is now an established lunchtime favourite. Sales of sushi are up 21% year on year, with the total UK sushi market now worth £38.9 million per annum.

The raw fish trade is booming in ‘western’ countries worldwide, with health benefits and an increased consumer desire for something different assisting the trend. The love affair with sushi has been noticeable here in Australia, with a host of new sushi takeaway stores opening on a consistent basis.

UK supermarkets, such as Waitrose, have begun stocking the product over the past couple of years as it has become more mainstream. Sales at Waitrose have increased as much as 88% in recent years, with a good helping of sushi proving as popular with office workers as lunchtime staples such as sandwiches and salads.

Waitrose Sushi Buyer, David Stone, believes that health is the primary driver of sales of the product. “With its low calorie count and nutritional benefits, shoppers are going against the grain and looking for more than just bread in their lunch hour,” he commented. “Oily fish is rich in vitamins and Omega-3 fats have benefits for both body and brain making it the perfect midday snack.”

Only a few years ago sushi was considered more of a luxury in the UK (and most ‘western’ countries) and as such could only be found in specialist stores and restaurants. “Sushi has been doing extremely well as a newcomer to the lunch menu and has become a mainstream item – albeit one with an ‘exclusive’ quality,” Andy Gray, Marketing Manager at Seafish, added. “Our research shows that people are buying sushi for its aspirational values – it’s seen as exotic, healthy and trendy. It is mostly young people aged between 16-22 that dominate the market but there is emerging growth in the older age categories as well.”

The A2 Milk Company’s transformational 12 months pays off
﻿The A2 Milk Company this week announced it has already brought in AUD $148 million of revenue for t...
14 disruptive food-tech startups that will change how we eat
Food technology is all about piling your plate with safer, cheaper, fresher, more nutritious and env...
Unilever re-commits to recyclable packaging
Unilever has committed to ensuring all its plastic packaging globally is either fully reusable, recy...
Australian listed world first Israeli irrigation group shines
Now in its 20th year, Agri-Tech Israel 2018 focused on agriculture in arid and semi-arid regions, pr...
Super-Size Me 2 takes on fast food industry again
Film maker, Morgan Spurlock, is releasing a follow up to his 2004 movie documentary on McDonald’s, S...
Penfolds falls victim to “hotbed” of food fraud
Police have seized 14, 000 bottles of fake Penfolds wine that was for sale in China.
Bega and Blacmkores Chinese infant formula venture struggling
The dramatic 16.7 per cent fall in the share price of Bega Cheese has generated much comment.
The Spoon lists the Food Tech Top 25 companies of 2019
On May 20 2019, the online publication The Spoon released its 2019 ‘ Food Tech 25 ‘ list of the top...