Author, journalist and science writer Julian Cribb has created a sobering text in The Coming Famine: The global food crisis and what we can do to avoid it, from CSIRO Publishing. 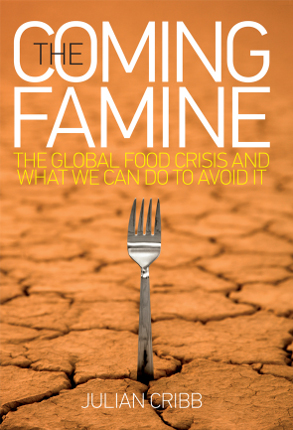 “Despite the global food crisis of 2007-08, the coming famine hasn’t happened yet. It is a looming planetary emergency whose interlocked causes and deeper ramifications the world has barely begun to absorb, let alone come to grips with. Experts predict the crisis will peak by the middle of the twenty-first century; it is arriving even faster than climate change. Yet there is still time to forestall catastrophe,” says Cribb in his introduction.

Not just peak oil, but peak land, and even peak people, have and will continue create vast pressures on the food chain, with humanity running through every available resource – nutrients, fish stocks, arable land, usable water, fertilisers – without regard for the future.

Despite the bleak picture he paints, Cribb believes that human resourcefulness is more than a match for this particular problem, and sets out in each chapter his suggestions for beginning to fix each problem on a global scale, a farming scale and on a personal level.

Increased R&D for food security and efficient growing techniques, as well as good farming techniques, water management, reduced waste and sensible government could all make a difference, according to Cribb.

This book is a smooth and engaging read, equally of interest to the food manufacturing industry, agriculture, politicians and the concerned citizen.

The Coming Famine is available from CSIRO Publishing and good bookstores at a RRP of $29.95.

New world of competition, earnings growth challenge awaits Coles
OPINION: STRONG future earnings prospects from less capital-intensive businesses is what Wesfarmers ...
Organic trend: ALDI joins Coles and Woolworths expanding category
THE organics "mega-trend" is drawing ALDI to the party with its launch this month, Organics Month, o...
Wine Australia launches largest-ever promotion of Australian wine in the USA
This week, Wine Australia launches its largest-ever promotion of Australian wine in the USA – the F...
Allen’s Lollies opens Melbourne shop for Christmas
An Allen’s Lollies store has been opened in Melbourne to provide gifts for the 2017 festive season.
Wagyu Quality Shines at Hog’s for Branded Beef Competition
The pinnacle of Australian beef was on show at Hog’s this past week when it hosted the Australian Wa...
Coopers launches its 2016 Vintage Ale
Coopers has launched its 2016 Vintage Ale.
NZ’s Mother Earth expands in Australia with new muesli bars
New Zealand brand, Mother Earth, has launched a range of traditional muesli bars into Australian Woo...
Hospitality gift cards launch nationwide to help the industry get back on its feet
The Restaurant Gift Card and The Pub and Bar Gift Card launch exclusively in Woolworths at a time w...

One thought on “Book review: The Coming Famine”