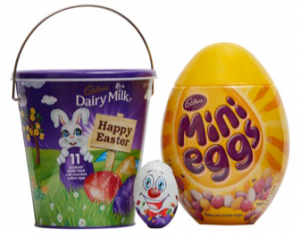 Many Australians are familiar with Cadbury’s traditional ‘Humpty Dumpty’ egg which contains coloured chocolate buttons inside. After selling the ‘Humpty Dumpty’ egg in Australia for over 50 years Cadbury will now be selling a smaller “treat-sized” 25g option. The egg has a recommended retail price of AUD$1.69 and will be available for purchase from January 2016.

The Cadbury Dairy Milk Hunt Bucket has been created for those wishing to organise an Easter egg hunt. Each 187g bucket contains 11x17g individual hollow eggs. The bucket will be available from February 2016 and has a recommended retail price of AUD$10.00.

Cadbury’s Mini Egg Jar contains six 38.5g mini Easter eggs. The jar comes with a screw top lid and will be available from February 2016 with a recommended retail price of AUD$10.00.

All three of Cadbury’s new Easter products will be sold in Australian supermarkets, discount department stores, independent grocery stores, petrol and convenience stores.
Cadbury has also announced that its annual Easter egg hunt and family picnic held at Werribee Mansion in Victoria will return bigger and better in 2016. The event is planned to be bigger than the 2015 event with 8, 000 tickets available for purchase this year (only 6, 000 went on sale in 2015). Cadbury’s Easter Egg Hunt supports the Good Friday Appeal which raises money for the Royal Children’s Hospital in Melbourne.

Biggest video bloopers Aussie workers have made in meetings
New research has revealed that around one-quarter (23 per cent) of Aussies in the workforce have ma...
Metcash tackles competition with ethical private label range
Supermarket wholesaler, Metcash, is attempting to revive its food and grocery profits by appealing t...
Nestle’s launches special KITKAT at chocolatory for Chinese New Year
Nestle Australia will be selling a range of special edition Kit Kats to help celebrate the Lunar New...
Deakin Uni report claims Health Stars Ratings misleading on some so-called ‘junk foods’
A new study into food labelling has shown the current Health Star Rating system may be misleading c...
Nutrition experts reveal 12 essential food skills every Australian child needs for healthier lifetim...
Australian children have more access to information on healthy eating than ever before, yet busy fa...
Arnott’s opens the polls and let’s Aussies decide on the New Tim Tam flavour
The polls are open! Australians will make their preferences known as the country decides on the new...
Raw chicken linked to paralysis in dogs
Chicken necks are a common treat for dogs, but pet owners are being warned they have been linked wit...
Implications of Novel Coronavirus (Covid-19) for Food Processing, QAPartners
The current Novel Coronavirus (Covid-19) crisis is heavily focussed on medical intervention, and ri...