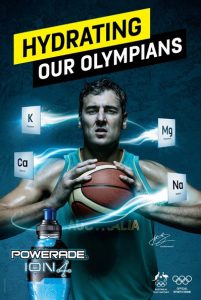 Powerade first debuted at the 1992 Barcelona Olympics and has a 24 year cross-promotional relationship with the Olympic Games.

The multi-million-dollar campaign will feature Australian Olympian and basketball player, Andrew Bogut, who will appear on bottle packaging.

The campaign will also include the launch of a ‘limited edition’ Mandarin flavour of Powerade ION4.

Brand Manager for Powerade, Sonja McCarthy, said Powerade has been synonymous with sporting excellence since it was first launched at the 1992 Barcelona Olympics.

“This time round, we want to capitalise on these figures by reaching consumers in creative and impactful ways through a significant marketing campaign which includes out partnership with NBA champion Andrew Bogut.  It’s an exciting occasion for Powerade and we hope to capture the attention of consumers and inspire the nation, just as our athletes will as they compete in Rio.”

Rio Olympics branded Powerade is available now and until the end of the Olympic Games.

The Olympic Games are being held in Rio De Janeiro, Brazil, from Friday 5 August to Sunday 21 August 2016.

Premium gin distillery takes top shot at the 2019 Telstra Tasmanian Business Awards
A Devonport distillery, Southern Wild Distillery, has been named the 2019 Telstra Tasmanian Busines...
Australian Gin Awards announce 2019 winners
One of the highlights of the craft gin explosion in Australia is the Australian Gin Awards judging ...
Foodbank launches largest-ever Shop and Share campaign with Woolworths
Foodbank has launched its largest-ever Shop and Share campaign.
App offers new way of stopping food waste
A new app offering another way for food retailers to prevent unsold food going to waste has launched...
Style and serve the ultimate cheese board with these top tips
Nothing quite tops a virtual dinner party like a good cheeseboard. In fact, for many this is the hi...
Concern for lead levels in Australian veggie patches
A RMIT University study has found Australians growing veggie patches could be planting in areas cont...
Peters ice cream and Cadbury chocolate collaborate for the first time to launch new range
Two iconic brands, PETERS and CADBURY, have joined forces to launch an exciting new range of produc...
Innovative ‘Hailstorm Heroes’ campaign returns to help SA farmers
The successful Australian ‘Hailstorm Heroes’ marketing campaign to help sell marked fruit is back to...