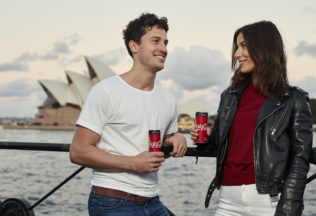 The new ‘Coca-Cola No Sugar’ has been launched with Coke describing it as “the best tasting sugar-free Coke ever”.

President of Coca-Cola in Australia, Roberto Mercade, said Coca-Cola thinks the drink is the closest Coke has every come to replicating the taste of original Coke in a sugar-free alternative.

“We wanted the experience of drinking Coca-Cola No Sugar to be as close as possible to ‘The Real Thing’,” he said.

Coca-Cola No Sugar was created after more than five years of research recipe mixing and flavor trials. The drink was developed by staff at Coke’s US headquarters.

Coke has labelled the launch of the drink the biggest launch for the company since it introduced Coke Zero in 2006.

Coke Zero will however now be phased out when consumers are determined ready.

Coca-Cola has experimented with alternatives to its full sugar Coke in recent years, introducing Coke Life which was partially sweetened with stevia in 2015.

Earlier in 2017 Coke Life was however shelved and replaced with Coke with Stevia.

Evolution of no sugar Coca-Cola

1982:      First ever extension of the Coca-Cola trademark, Diet Coke launched

2017:      Coca-Cola No Sugar launches with the closest ever taste to Classic Coca-Cola