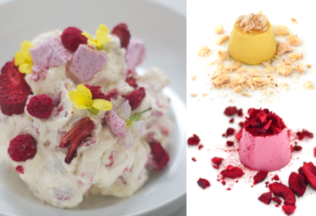 New Zealand’s leading freeze-dried company, Fresh As, has launched in Australia and aims to revolutionise how consumers cook at home.

Founded in 2003 by Tommy Roff, Fresh As first began with developing freeze-dried herbs. The driving force was due to being unable to provide French Tarragon to Chefs, all-year-round. With the specific herb being available only three months of the year, Tommy decided to invest in the freeze-drying method and technology, which now allows the herb to be readily available.

Since its inception, the freeze-dried empire has expanded its range to include over 100 different products, including crunchy fruits, essential herbs, flavourful fruit powders and dessert solutions such as panna cotta in three different flavours.

The gap in the Australian market for freeze-dried products was the catalyst for launching Fresh As locally, along with the help from New Zealand-born Chef Ben Shewry – who is the owner of award-winning restaurant, Attica in Melbourne.

With Ben’s support and huge efforts, Fresh As was able to build an extensive network of customers in the fine-dining space. This ultimately gave Fresh As the golden opportunity to take the Australian restaurant scene by storm, where it’s used in venues including QUAY, Aria, Bennelong, Automata, Brae and Attica.

Following this success, Fresh As wanted to provide Australian consumers the opportunity to create dishes at home with the same restaurant-quality ingredients. “Although we had built a strong professional culinary following in Australia using our food service range, the retail presence wasn’t as strong,” Tommy said. “There was a powerful demand for natural products with no additives, artificial colours and preservatives in Australia and we believed that this was the ideal time to gain momentum.”

In terms of how the freeze-drying method works, sub-zero temperatures are combined with vacuum technology, turning ice crystals within the frozen food directly into vapour. This vapour is then drawn out leaving a dry product that fundamentally retains its structure, colour, flavour and nutritional values.

While Fresh As has an incredibly varied product range, it’s the delicious taste, texture and quality ingredients that the brand is most proud of – and it’s evident why they are a kitchen must have. Consumers can now add a whole new dimension of taste, simplicity and convenience to their weekly cooking by adding flavoursome fruit powders to their smoothies, crumbling delicious crunchy fruit over desserts to intensify the taste or creating a rub with herbs to add that extra punch of flavour.

Fresh As provides cooking enthusiasts and those who enjoy entertaining, the opportunity to recreate restaurant quality meals, utilising the same ingredients as the highest echelon of Chefs in Australia. The full Fresh As retail range is available online, so consumers can start their culinary journey and transform the way they use delicious ingredients in the kitchen.

ALDI Australia commits to traceability and responsibly sourced seafood
ALDI Australia announced it is the first Australian retailer to join the Ocean Disclosure Project (...
Australians want to work for Coles, LinkedIn data
Coles has come fourth in a LinkedIn data list naming the top 25 Australian companies best at attract...
Wesfarmers’ woes compounded by Coles supermarkets results
Coles has dragged down the Wesfarmers 2018 first half year financial profits with its earnings falli...
Chobani wins Woolworths Supplier of the Year award
The yoghurt producer also won the Perishables Supplier of the Year .
Roper River region being tested as Australia's new 'super Food Bowl'
A $35 million study has commenced by CSIRO on the possibility to irrigate agriculture in the Roper ...
1 in 2 Aussie shoppers want food retailers to stop wastage
Aussie shoppers have spoken: new data reveals that more than half of us aren’t happy about wastage ...
Weather hits Select Harvest almonds
Select Harvest has produced less almonds than expected for its 2017 season with the weather to blame...
Patties Foods in acquisition bid by PEP
Patties Foods has announced it is awaiting a proposal for its acquisition by Pacific Equity Partners...