The Big Banana gets a sweet makeover 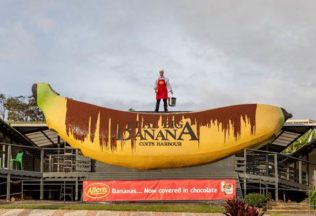 Australia’s legendary Big Banana in Coffs Harbour was covered in chocolate-like syrup to celebrate the launch of the new Allen’s Mini Chocolate Bananas.

For the first time in its history, the 13-metre-long and 5-metre-high landmark got a makeover as a chocolate-like syrup was poured over the banana to mark the unveiling of the new bite-sized creation. But don’t worry the team at Allen’s saved the real chocolate for the mini bananas.

The spectacular meeting of two icons was orchestrated by a stuntman who was bananas enough to climb to the top and pour 180-litres of the special syrup to make the magical moment a reality. It took a total of 18 people, 13 buckets, two safety harnesses, and one daredevil to change the face of The Big Banana. The pour took a total of 91 minutes to complete, to the enjoyment of onlookers who witnessed the once-in-a-lifetime moment.

When it comes to the ‘real peel’, the team at Allen’s has made the perfect bite-sized treat, covering its cherished banana lolly in delicious milk chocolate. The twist on this classic will not only melt-in-your-mouth, but they are also gluten free and have no artificial colours and flavours.

Nestlé Head of Marketing Confectionery, Joyce Tan, said: “Allen’s is a proud Aussie brand many of us have grown up with, so when we decided to make the much-loved original bananas bite-sized and cover them in chocolate, there was only one way to mark the occasion.

“The Big Banana is an iconic landmark that has created many special memories for Aussies across the country, and has also been a big supporter of Allen’s banana lollies, so we’re thrilled to be the first confectionery brand in the world to give this great icon an ‘apeeling’ make-over to celebrate the new Allen’s Mini Chocolate Bananas. Afterall, the only thing better than one Australian icon being given a delicious chocolate makeover, is two Australian icons being made over!”

Aussie-grown olive oil wins double gold at worlds most prestigious competition
Taralinga Estate has superseded last year’s performance at the 2020 New York International Olive Oi...
Food for thought: edible public spaces
Food is a central part of culture, and at a fundamental level, we also need it. However, food produ...
Researchers find rice grown in high carbon dioxide environments ‘may be less nutritious’
Scientists are warning that rice, one of the world's most important cereal crops and the primary foo...
Four‘N Twenty spices things up
Patties Foods is launching a new Four‘N Twenty pie flavour to warm up its customers this winter.
Coles pushes supply chain modernisation with new DC’s
On 24 January 2019, Coles Group Ltd announced that it has executed definitive contracts with Witron ...
Smith's surprise product: Lamington-flavoured chips
One of Australia's largest chips brands, Smiths', is releasing a sweet flavoured chips, inspired by...
Tassal capitalises exports by dropping Coles private label salmon and blames global warming
Tassal will stop supplying Coles supermarkets with private label salmon as of 4 June 2016.
Restaurants Cosy Up To Make The Most Of Winter Dining
Experience a taste of the tropics, even mid winter, with a visit to Bungalow 8 in Sydney. This f...