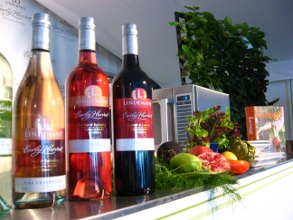 Australian wine giant Lindemans has expanded their low-alcohol Early Harvest range, and is beginning a push to bring the wines into the mainstream.

The first Lindemans Early Harvest wines, produced two years ago, have gained in popularity.  The intervening years have allowed Lindemans to develop the process to create a low-alcohol (and correspondingly low-calorie) wine that still tastes good.

Early harvest wines, produced from grapes picked earlier in the season, tend to be lower in alcohol but also lower in flavour.  The new wines are the final result of a project to lower the alcohol content of the wine without sacrificing taste.  Grapes are picked early, and then the resulting wine is filtered, removing a further 1-2% of the alcohol.  The Early Harvest range is between 7.5% and 9% alcohol per volume, compared to 12-15% for standard wines.

“The difficulty is finding a grape which has the flavours people want, that can withstand the early harvest process,” said Lindemans chief winemaker Wayne Falkenberg.  For most of the Lindemans has used a variety of blended grapes to produce their Early Harvest range, growing the fruit in the warm Murray Valley region where fruit ripens earlier.

Mr Falkenberg said that the wines have been particularly popular with women, and the range has been expanded accordingly, to include a rosé and a sparkling white.  Another addition, a shiraz, is the result of Lindemans’ efforts to add a red wine to the range, where previously only white and blends existed.

The wines are now being rolled out to major retail outlets across Australia at a RRP of $13.99.