Organic status to be threatened by imported bananas?

A Biosecurity Australia (BA) decision in early March recommending that Cavendish bananas from the Philippines be allowed to enter Australia continues to draw a worried reaction from many stakeholders concerned with protecting a major Australian industry.

The Australian Banana Growers’ Council (ABGC) and Biological Farmers of Australia (BFA) have come out strongly in opposition to the move.

Banana farmers, workers and local business people will hold a demonstration in Cairns; the IGA chain of 1,270 supermarkets will lobby Australian Quarantine and Inspection Service (AQIS) to refuse the import recommendation and will not stock Filipino bananas while local supplies are available and a Senate Inquiry has been held on the issues. 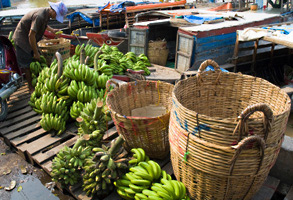 Dr. Andrew Monk, BFA Organic Standards Committee Convenor, says that Australian producers’ certified organic status could be placed in jeopardy by the imports, should they introduce exotic diseases that cannot be treated or eliminated using organic or biologically orientated methods.

Dr. Monk says exposure to foreign pests and disease, several of which are endemic in the Philippines but do not exist in Australia, could destroy the livelihoods of farming families and farm workers in the organic banana industry – “a promising and growing market sector in its own right” – in a matter of days.

Despite claims from the Philippines that diseases such as Moko, Black Sigatoka and Freckle could be eradicated with proper phytosanitary procedures, Dr Monk claims the import recommendation jeopardises Australia’s growing reputation as a provider of ‘clean and green’ foods – a claim which many organic and other farmers build upon.

“BFA supports the prohibition of specific imported products from countries where there are clear biosecurity risks associated,” he advised. “We do not want to ruin the advantage of separation from product contamination which Australia’s isolated geographic position affords.”

BFA is calling for reform of the current assessment methods used for scientific and market risk review to a format that embraces developing specific markets such as organic.

Gary Grima, an organic banana grower from Innisfail, has concerns about the economic impact on a major Australian food industry if the imports are allowed and even deeper concerns about the possible effect of exotic pests and disease that may come into the country.”Spot checks from a whole imported shipload coming into the country leaves a margin for error. There’s already been one outbreak of Black Sigatoka in a commercial production area in Australia; they threw everything at it and Australia’s the only country that’s ever beaten it,” he said. “I’d just started organic farming and had to put it on hold until the outbreak was eradicated because of the synthetic chemicals used. If it ever gets into organic farms all we can use is mineral oil – and that won’t stop Black Sigatoka. If Moko or Freckle get in nothing will stop them.”

The Philippines is the biggest banana exporter in Asia and their produce will be imported under strict quarantine policy, Biosecurity Australia has suggested.

Unilever and Smith’s pay penalties for misleading use of school canteen labelling in supermarkets
Unilever and The Smith’s Snackfood Company, which is owned by Pepsi Co, have each paid AUD $10, 800 ...
SPC announces sale of the Kyabram factory
SPC has today announced the sale of the Kyabram factory and the iconic brands of IXL jam and Taylor...
What can we learn from Menulog's online meal ordering figures?
Menulog has released its inaugural report ‘A Growing App-etite’, documenting the growth trends and f...
New Woolworths ‘food service concept’ could be on the horizon
Woolworths has mentioned potential future plans for a new food service concept store in a recent cou...
Lion acquires stake in Australian coffee company
Lion has acquired a minority stake in Schibello Coffee, owners of the Schibello, Arte Caffé and Clea...
FIAL launches UK Grocery Accelerator Program
Food Innovation Australia Limited has launched a UK Grocery Accelerator Program to help Australian f...
Defiant Kellogg’s stares down CHOICE Shonkys name and shame
A FOOD industry player and the “demon” sugar have been included in CHOICE magazine’s hall of shame, ...
New Bulla Murray St crowned cream of the crop at Sydney Royal Cheese & Dairy Competition
In January 2020, Bulla Dairy Foods (Bulla) launched its latest premium range of ice creams, Bulla M...