CEO stakes claim for his product in Minced meat row 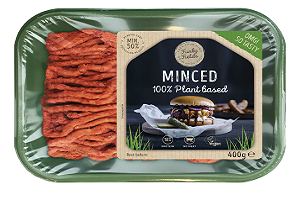 CONTROVERSIAL plant-based meat substitute Minced this week debuts in the meat section of Sainsbury’s UK supermarkets. The positioning created a stir here this month when Woolworths did the same thing. We speak to maker’s CEO in Denmark.

When Naturli Foods launched Minced under the Funky Fields brand in Denmark this year it decided with the retailer that the product belonged on the meat counter – not hidden in a specialty area for vegans and vegetarians.

The decision in Denmark, as here in Australia, sparked a hostile reaction from the meat and livestock lobby and some politicians who want the product removed from the meat aisle.

Who are the category managers of retail in Australia?

“I’m quite sure about what Woolworths are listening to,” he said, responding to a question about the controversy.

“Of course, they are listening to the politicians and the meat associations, but who are the real category managers of the retail business in Australia?

“I think that’s the same answer that we get in Denmark. It’s the consumers.

“And if the consumers find that it is a good idea to have a new alternative in the meat counter that is 100 per cent plant-based then I don’t think Woolworths will back off for one second.”

Mr Lund said Woolworths Australia has sold out its first consignment of Minced after this month’s launch, but he understands the opposition.

“It really is the holy grail, the sacred area of the supermarket, we are suddenly entering with this fantastic product,” he said.

“The same thing happened in Denmark. But in Denmark it is documented that more than 50 per cent of the Danish population have a desire to cut down on meat consumption.

“We were sold out after 14 days and had to move our production to a larger facility over a weekend because we did not have enough capacity for the demand.

“And I can see how the meat associations and the politicians say this (positioning) is ‘terrible’.

“But this is just the consumers desire for something different than animal products and you have to embrace it.”

Mr Lund said the product is for mainstream consumers who have a desire to cut down on the consumption of meat for different reasons.

“You have lamb, you have chicken, you have beef and now you have something completely made out of plants,” Mr Lund said.

“We engaged a lot of mainstream consumers who really wanted to try plant-based food but had difficulties getting started. How can I make a dinner that whole family would think was good?”

Mr Lund said “mince” was the basic meal component they needed, leaving consumers with a vast choice of dishes to make.

“One of the first senses you use in a supermarket is the eye and this looks like something you know, and are used to having in your kitchen,” Mr Lund said.

MORE: Is this the biggest food revolution since sliced bread?

MORE: Toxic fears: Farmers warned not to eat the beef they sell